Jim Gilvin is the only candidate for Mayor of Alpharetta who does not rely on developers to fund his political campaigns and keep a roof over his head.

Why is that important? Click on the video below to see. 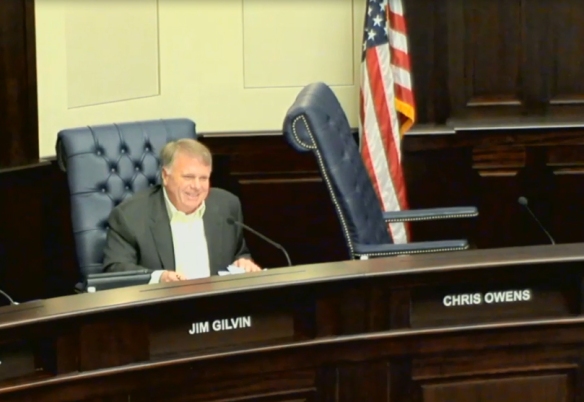 The campaign disclosures for the May 22nd special election to fill Alpharetta’s vacant Mayor’s office and two city council seats have been posted on the city’s website for public review. You can see the reports at this link: https://www.alpharetta.ga.us/government/voting-elections/campaign-disclosures

Unfortunately my opponent filed spreadsheets using such a tiny font that it will be difficult for most people to see how many high density mixed use developers and commercial property owners have funded his campaign. As a public service I have posted them below so you can enlarge them for easier inspection. Alpharetta has had a written goal limiting apartments for as long as I can remember. Unfortunately that goal has been repeatedly ignored by my opponent despite his campaign promises. Here is the truth. 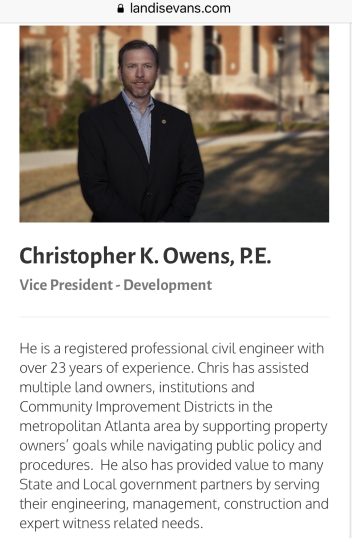 Alpharetta voters deserve to know the truth. The truth is that my opponent Chris Owens is the Vice President of Development for a consulting firm that does traffic impact studies for many of the developers building projects in Alpharetta. Strangely that relationship does not show up on his campaign disclosure.

The Alpharetta City Council meeting this week included two zoning cases where developers hired Chris Owens’ firm to perform their traffic analyses. According to the analysis provided by Chris Owens’ firm those two projects will add more than 5,000 car trips to Alpharetta traffic every day.

Last year Councilman also voted to spend 6.9 million dollars of taxpayer money on a parking deck needed for one of his client’s buildings downtown.

Alpharetta residents deserve a mayor who is working for us not developers. 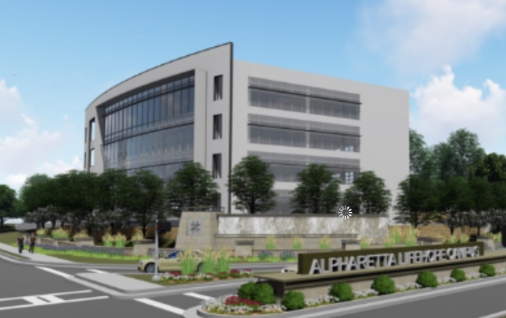 Here is the article by Rachel Kellogg at the Neighbor.

Though council voted unanimously in favor of the resolution, Councilman Chris Owens explained that the approval allows the draft to be reviewed to move the process of adopting the plan along.

“This is not an endorsement or approval of any sort,” he said.

“It’s just a point on the time line that we must meet to stay on schedule.”

So the Alpharetta City Council unanimously voted yes to submit their draft of the new land use plan to the Atlanta Regional Commission… but they don’t approve of it?

Bill Clinton would be so proud.

I previously mentioned that the City of Alpharetta is in the process of revising the comprehensive land use plan that will determine the future of Alpharetta’s schools and affect the property values of every home in our community. Below is the picture of what the city has planned. You can find more details at this website which the community development department inexplicably set up seperate from the city’s website. 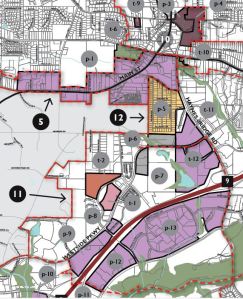 Welcome to the future of Alpharetta... worse traffic and bad schools

All you really need to know is that the entire horseshoe shaped area in color extending throught the Northpoint area up Haynes Bridge road and circling around Wills Park and Highway 9 will be filled with apartments and condominiums. That means thousands more high density condos and apartments which will create worse trafffic, decimate our public schools and turn Alpharetta into an urban environment that is conducive to more mass transit supported by taxpayers. That is the plan of the city.

It is not too late to change the city council’s mind but there isn’t much time left. If you feel strongly about this issue one way or the other I encourage you to contact the current Mayor and City Council before they approve this plan in the next few weeks.  The contact information below is taken from the City of Alpharetta website and I hope you will all use it to make your voices heard. It is not yet too late but time is of the essence.

Below is a letter submitted by MetLife to justify the Peridot project proposed for Alpharetta. The new project would remove more than 1800 potential jobs from the site in return for building 500 condominiums. Why would the Alpharetta City Council do that? I will let Mr. Ikwut-Ukwa of MARTA’s planning office explain:

“MARTA is also working with the City of Alpharetta to initiate an LCI for the North Point Mall area as part of a proposed north line rail extension. In the past the City of Alpharetta had also inquired from MARTA on the feasibility of having the proposed rail station at a location across SR 400 from the Mall in the vicinity of the development site. MARTA has not yet made a firm decision on the station location but believes this development will add to the density in the area, making for a better transit supportive environment.

For at least five years the City of Alpharetta has been working with MARTA to increase the density of our city so they can justify bringing trains here. Funny, I don’t remember Alpharetta voters being asked about that. It must have happened at a  charrette.

IF an Alpharetta mayoral or city council candidate comes knocking on your door this summer to ask for your vote don’t forget to tell them how you feel about the urbanization of Alpharetta to lure MARTA. Obviously they think it is a good idea. They just don’t want you to know. 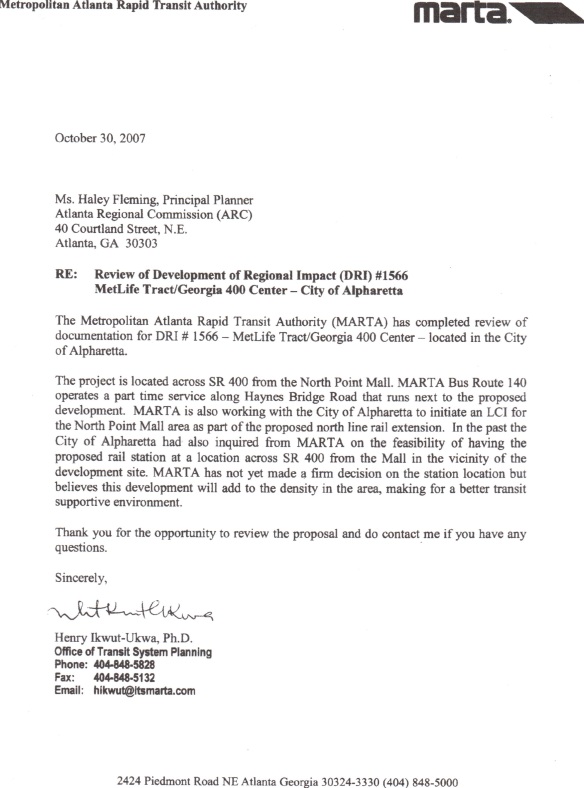 MARTA, is it smarta for Alpharetta?