That day in 2016 when Mark Toro, the developer who has built more apartments in Alpharetta than anyone else over the last ten years, begged Georgia State Senators to raise MARTA sales taxes on the people of Alpharetta by 50% because it would be good for his business.

Jim Gilvin is the only candidate for Mayor of Alpharetta who does not rely on developers to fund his political campaigns and keep a roof over his head.

Why is that important? Click on the video below to see.

The campaign disclosures for the May 22nd special election to fill Alpharetta’s vacant Mayor’s office and two city council seats have been posted on the city’s website for public review. You can see the reports at this link: https://www.alpharetta.ga.us/government/voting-elections/campaign-disclosures

Unfortunately my opponent filed spreadsheets using such a tiny font that it will be difficult for most people to see how many high density mixed use developers and commercial property owners have funded his campaign. As a public service I have posted them below so you can enlarge them for easier inspection. Alpharetta has had a written goal limiting apartments for as long as I can remember. Unfortunately that goal has been repeatedly ignored by my opponent despite his campaign promises. Here is the truth.

Alpharetta voters deserve to know the truth. The truth is that my opponent Chris Owens is the Vice President of Development for a consulting firm that does traffic impact studies for many of the developers building projects in Alpharetta. Strangely that relationship does not show up on his campaign disclosure.

The Alpharetta City Council meeting this week included two zoning cases where developers hired Chris Owens’ firm to perform their traffic analyses. According to the analysis provided by Chris Owens’ firm those two projects will add more than 5,000 car trips to Alpharetta traffic every day.

Last year Councilman also voted to spend 6.9 million dollars of taxpayer money on a parking deck needed for one of his client’s buildings downtown.

Alpharetta residents deserve a mayor who is working for us not developers. 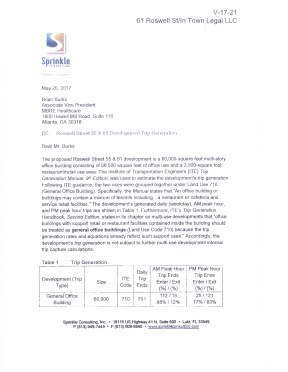 Last year I wrote this article about the impact mixed use developments approved by our city council will have on traffic in Alpharetta. Now it seems some of the experts are even starting to voice concerns about the real estate trend that will soon add more than 100,000 cars to Alpharetta roads.

You can read the full article by clicking the photo below.

A couple of weeks ago I had the opportunity to sit down with Hans Appen of Appen Media and record a podcast for his Inside The Box series of interviews with local elected officials. It was a good conversation about local politics, public service, the role of social media in both and a host of other topics. It was an engaging conversation and if you care about how those things impact your community or have ever considered running for office you should check it out.

Alpharetta City Councilman Jim Gilvin sits down with us to talk about how and why citizens become more involved in their government. We look back on his own experiences and what’s in store for his political future.

Serving the people of this community for the last six years on Alpharetta City Council has been the greatest honor of my life. And now that Mayor Belle Isle is running to be Georgia’s next Secretary of State I have decided to run for the office of mayor.

The coming new year will bring a timely opportunity for the people of Alpharetta to decide where they want to go from here. I look forward to participating in that discussion.

I will continue to serve our residents in my current capacity until the office of mayor has been vacated but there has been a great deal of speculation about potential candidates to replace Mayor Belle Isle so I wanted to be transparent about my  intentions. Below is today’s press release announcing my campaign.

Thank you for your support.

“I appreciate the dedication and energy Mayor Belle Isle brought to his time as mayor. Our city has come a long way and Alpharetta is a much different place because of his leadership. And as the people of Alpharetta begin looking to the future it’s important for them know there is a candidate with a proven record of public service who will deliver on their priorities for the years ahead.” Gilvin said.

When elected to council in 2011 Gilvin originally ran on a theme of “Growth We Can Live With” and he believes voters appreciate his consistent record on balanced growth even when it was unpopular with other members of council. “I voted to preserve the green space and trees in front of city hall where high density apartment buildings are being built now and took a lot of heat from other council members for that. But I promised the people of Alpharetta a village style city center and honoring that promise was more important to me than being popular with politicians and developers.”

“At this critical point in Alpharetta’s history our residents have an opportunity to set the course for our future. I have a plan to restore balanced growth and preserve the qualities that make Alpharetta the best place in Georgia to raise a family and do business. My plan reflects three priorities I always hear from constituents- do a better job of balancing growth, provide real solutions for traffic congestion and invest in areas outside of downtown.” Gilvin said.

The top priority for Jim Gilvin will be to ensure city policies reflect balanced growth outlined in Alpharetta’s comprehensive plan. He cites zoning decisions that ignored limits on apartments as a prime example. “When I was elected the comp plan had a clear goal established for the ratio of single family homes and apartments. But the ratio has consistently been ignored and we have seen thousands of apartments approved. I have been a vocal advocate for single family homes over apartments and it is time we honor the goal we set.”

When discussing how he plans to reduce traffic Gilvin says that it is important to have a mayor willing to prioritize resources for traffic relief and who understands how poor zoning decisions make congestion worse. “Zoning variances and taxpayer subsidies have been granted for enormous projects downtown without any consideration of their impact on traffic. Every property owner has a right to develop their property within limits outlined in the comprehensive plan. I never want to interfere with that. But many residents are frustrated by city support for variances and government subsidies that make traffic worse.”

Gilvin also says he is optimistic about road capacity improvements and transit proposals designed to relieve traffic as part of the North Fulton Comprehensive Transportation Plan. “For the first time since I started talking about traffic and transit a decade ago I am actually hopeful we may be able to set priorities based on data about costs, efficiency and the impact on traffic rather than just political agendas. But if we continue to approve height, parking and density variances on already congested corridors our residents are never going to see an improvement.”

Another priority for Gilvin is to invest in the renewal of the Northpoint Parkway corridor and Alpharetta’s residential areas. “Over the past few years our mayor and council have spent a tremendous amount of money reviving downtown and we have achieved excellent results. It is time for us to bring that same focus to renewing the Northpoint corridor while increasing our support for residential areas. The city is already working with Northpoint property owners to update the corridor and we need to be as committed to that revival as we have been for downtown. We also need to ensure the parks and infrastructure which support Alpharetta’s residential neighborhoods are brought up to the high standard our residents should be able to expect. Building twenty-six acres of passive parks in residential areas, expanding the Greenway trail system and providing community centers on both sides of GA 400 will improve the quality of life and property values for everyone.”

Gilvin is enthusiastic about the years ahead. “Alpharetta is a special place and our future is bright. The delicate balance of great schools in a beautiful setting with a thriving business environment will continue to draw families from all over the world as long as we preserve that special character. For the last six years I have consistently sought that balance for the people of Alpharetta and now look forward to continuing that service as mayor.”

Jim Gilvin has lived in Alpharetta since the late 1990’s along with his wife, Mary Anne, and their two children Justin and Sarah. The Gilvins live in the Windward subdivision and attend Mount Pisgah United Methodist Church. Jim Gilvin holds a Bachelor’s Degree in Finance from Georgia Southern University and is a small technology business owner.

In an effort to make herself more available to the public and solicit feedback from the people she serves, Alpharetta’s Community Development Director will begin hosting informal monthly meetings for the public. Beginning December 13th, Kathi Cook will host a meeting on the second Wednesday of every month to talk about developments and their impact on the future of our city. 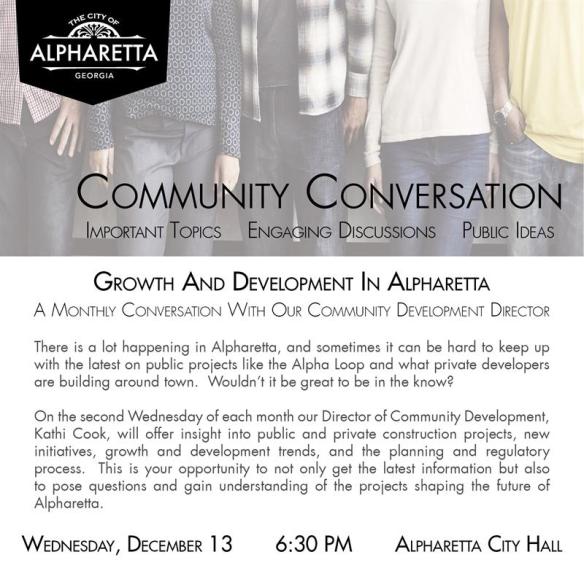 This is a terrific idea and I applaud Ms. Cook for her initiative. These meetings will provide a unique opportunity for those of you who care about your community to hear what’s going on from the person who knows it best. And do it in a friendly, informal setting.

But Ms. Cook’s outreach can only succeed with your help. Please support her effort by helping to spread the word and by showing up at City Hall on December 13th at 6:30 p.m.

Hope to see you there.