Apartments and their impact on Alpharetta have been a touchy subject for as long as I can remember. My first introduction to the issue was when a next door neighbor applied for zoning to turn his single family home into an apartment complex nearly twenty years ago and I have written 22 articles discussing apartments going back as far as  this article about urbanization and MARTA written in 2011.

For that entire time the City of Alpharetta has had specific goals regarding apartments or rental properties. There have been at least three different official goals for the city’s housing ratios that I remember. Curiously the only thing consistent about each of those standards is that they have all been ignored by the people elected to achieve them.

Alpharetta’s current housing goal as stated in the Comprehensive Land Use Plan was passed unanimously just last year. It says that the city’s goal is to maintain less than 1/3rd (32%) of our housing stock as rental properties. That ratio is to be measured by U. S. Census Bureau data. The latest numbers available are for 2015 and those numbers show that Alpharetta had 22,824 total housing units and 8,537 of them were renter occupied at the time. That means the current ratio of renter occupied homes to owner occupied homes is 37.4%. 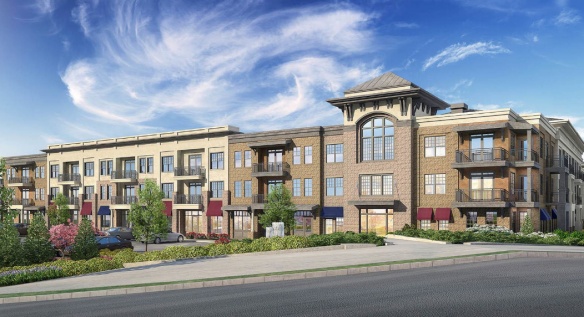 Which means Alpharetta had 1233 rental units more than the the city’s stated goal. To make matters worse there are already 700 more on the way if you include the additional 276 apartments opening this year in Avalon, the 168 apartments being built in front of city hall, the 129 apartments just approved on Devore Road and 111 apartments in the Echo complex on Westside Parkway. That would put Alpharetta 2,000 households over the comprehensive plan goal without even considering the 320 apartments proposed for the Fuqua project on Haynes Bridge Road or any of the senior housing facilities being built all over town. Most of the senior housing projects are not considered to be apartments.

That is a snapshot of how much Alpharetta’s percentage of rental housing exceeded the city’s guidelines in 2015. But what was the overall trend? Did Alpharetta make any progress at all in reducing rental housing ratios between 2010 and 2016? No. Quite the opposite.

The ratio of rentals to owner occupied housing in Alpharetta has gotten substantially worse since 2010. Census numbers show that Alpharetta had a total of 20,454 housing units in 2010 but that grew to 22,824 by 2015 for a net growth of 2,370 households. Of those additional households, 1,752 were identified as renter occupied which means 74% of Alpharetta’s housing growth over that time was fueled by renters.

Click on the pictures below to see the census data.

Such rapid growth in apartments and rental homes drove the ratio of renters to owners from 33.2% up to 37.4%. A 13% move in the wrong direction over a five year period. Once again that does not include the thousands of rentals already approved, built or on the way in the next few years and there is no reason to believe that is going to change in the near future. The number of single family homes being built compared to townhouses, condos and apartments is dwindling as available land disappears.

As mentioned earlier the topic of apartments has been a hot button issue in this city for a long time and reasonable people can disagree about the impact of attracting a much more transient population to Alpharetta. But the fact is that Alpharetta has very specific standards for what should be the appropriate mix of housing to maintain the health, safety and quality of life we enjoy…  yet the city moves further and further from those published goals every time we approve more apartments.