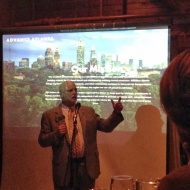 Last Thursday I attended the Evening to Support Transit Expansion With Senator Brandon Beach in Alpharetta hosted by the organization Advance ATL. It was a friendly and informal event held to support Alpharetta State Senator Brandon Beach’s proposed legislation which will permit Fulton County to increase the current MARTA sales tax by 50%. The additional $130 million a year would fund the expansion of MARTA’s heavy rail trains as far as Windward Parkway in Alpharetta.

Most of the people who attended were affiliated with Advance Atl but there were also representatives of the Sierra Club, the Council for Quality Growth and the Atlanta Regional Commission among others. There was even a state legislative candidate from Gwinnett County advocating better transit access for the impoverished immigrants in the district she would like to represent.

Of the 35-40 people attending I only spotted 5 people who live in Alpharetta: Senator Brandon Beach and his lovely wife, Alpharetta City Councilman Jason Binder, one person who identified himself as an Alpharetta resident and me. Suffice it to say that for an event to support a transit tax hike that will have an enormous impact on the people of Alpharetta the crowd was overwhelmingly composed of millennials who drove from inside the perimeter.

The casual environment of the event provided an excellent opportunity to discuss transportation, taxes and transit with people who are actively lobbying to pass Senator Beach’s tax hike. I found my conversations with a gentlemen who is a Transit Coordinator for the Atlanta Regional Commission (ARC) and a woman who is a transit advocate for the Sierra Club especially enlightening.

The Transit coordinator for ARC actually made the most thought provoking comment of the evening to me. He and I had a great discussion about heavy rail, my reasons for believing heavy rail would be the absolute worst possible transit option for Alpharetta and why based on those reasons I believe Senator Beach’s tax increase would have a devastating impact on the future of Alpharetta and North Fulton County.

We discussed the point that heavy rail was too expensive for the small number of people it would serve. We discussed how heavy rail was too inflexible to justify the exorbitant expense at a time when the future of transportation will be determined in large part by innovations like self driving automobiles and more flexible work environments. We even discussed how heavy rail would create worse rush hour traffic in North Fulton because it would concentrate heavier automobile traffic on the arterial roads as the majority of train riders would have to drive from other areas during the times our roads are already the most congested.

Then I mentioned that heavy rail was also the worst possible solution because it would never serve more than 7% of the surrounding population and would therefore never be feasible given the residential densities which foster the quality of life people here desire. His candid response was,”Well… that’s the problem.”

That’s when I realized that to a transit coordinator from the Atlanta Regional Commission the problem is that the people of Alpharetta reject the dense, urban environment needed to justify exorbitantly expensive and inflexible trains which would only make our traffic worse. Which is very different than the problem from the perspective of people who live in Alpharetta, prefer our green spaces, great schools and low crime rates but don’t want to be stuck in traffic on their way to work or back home to the lifestyle they love.

On one hand you have rail advocates who want suburban Alpharetta to become a dense, urban environment to support the lifestyle and transportation mode they prefer. But on the other hand you have people who enjoy a quality of life that can’t exist in an urban environment and simply want a cost effective mode of transportation to support their lifestyle. So when we get right down to it that is the problem: as a region we haven’t agreed on the problem we are trying to solve and if we can’t agree on the problem we will never agree on the solution.

North Fulton is a pretty affluent area. If most residents in Alpharetta or Johns Creek or Milton wanted to live in Sandy Springs or Buckhead they could… but they don’t. They prefer exceptional school districts, lower crime rates, and single family homes with yards for children and pets to play in. That is why they live here and they expect their elected officials to provide transportation solutions which support that quality of life.

I ran for office because I love Alpharetta. I love living in a city full of diverse people from all over the world who have chosen to make Alpharetta their home because they believe it is the best place in Georgia to raise a family and do business. I love my single family house on a 1/3 of an acre with grass and oak trees on a cul de sac lot. I love coming home to deer and chipmunks in my front yard and the occasional hawk or owl perched on my son’s basketball goal. I believe Alpharetta is a special place and so do thousands of other people who invest their time and money in this community to keep it that way.

And yet my neighbors and I are not so arrogant as to believe everyone should share our preferences. I have never heard a neighbor criticize people who live in Buckhead or Kirkwood for choosing to live in areas with higher crime and poor schools because they prefer urban environments with easier access to heavy rail. I have also never heard any of my neighbors advocate for higher taxes on those people who don’t choose our lifestyle to subsidize our preferences.

Different people have different priorities and should have the freedom to live as they choose as long as it doesn’t negatively impact other people’s rights. Fortunately events like the one Advance ATL hosted allow people with different backgrounds and perspectives to share their views face to face.

Because until we agree on the problem we can’t hope to find a solution… that’s the problem.

Today’s Atlanta Journal has an article that reminds me of something most people don’t realize: the Atlanta Regional Commission disproportionately represents seniors in the metro Atlanta community.

The article is Metro Atlanta getting older quickly and it is about the aging of the suburban population in Atlanta. It is a good article and I recommend you read the whole thing. As you do, also keep in mind that control of local issues like zoning and transportation are being systematically regionalized to an organization primarily responsible for providing services to the elderly, the Atlanta Regional Commission. Below is a graph of the ARC’s revenue sources and you can see that about one third of their money, more than 20 million dollars, comes from federal grants to serve Atlanta’s aging population.

The reason I point this out is that the AJC article makes it seem as though Atlanta is overwhelmed by an elderly population that it estimates to be 472,000 when in fact that is less than 10% of the metro area’s total population. Our aging population is certainly an important part of Atlanta’s community and future but it is still a relatively small percentage of our overall population.

And yet ARC, the organization which is increasingly responsible for the economic future of our entire state, is primarily an organization responsible for services catering to less than 1/10th of our population. Regardless of how you feel about government involvement in these kind of social programs it seems obvious that such a distortion is not in the best interest of our region.