Monday night the City of Alpharetta held a public meeting to unveil the new proposal for more taxpayer subsidized parking in downtown Alpharetta. It was great to see so many people show up for the meeting and most of the feedback I heard there and in the days since has been largely supportive.

Some people told me they have concerns about the cost and doubt the need for taxpayers to spend $8 million to build parking for downtown businesses. One of the commercial property owners downtown told me that the new plan still wouldn’t be enough. And others told me that the city should build all of the parking next to the cemetery and none on the Old Roswell Street site at all. 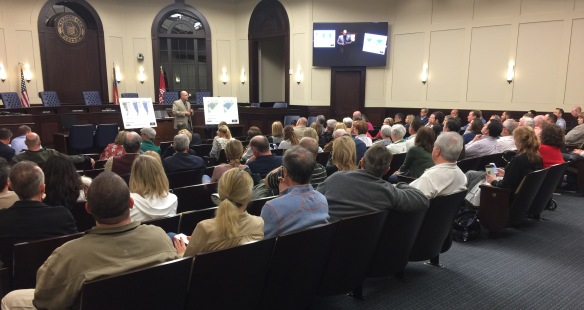 But in general most of the people who took the time to share their thoughts about the new plan feel it is a reasonable compromise between the previous proposals. The new plan would build 187 new parking spaces on Milton Avenue next to the cemetery at a cost of about $5 million. It would also add 80 parking spaces on the site between Roswell Street and Old Roswell Street behind Smokejack at a cost of about $3 million bringing the total projected cost for the two decks to just over $8 million total.

I am including a few pictures here but if you aren’t familiar with the new proposal I highly recommend that you review all of the materials available on the city website here. Our staff did a tremendous job assembling all of the relevant supporting materials there.

The final decision will likely be made during Monday night’s Alpharetta City Council meeting so please take the time to look at the new plan if you haven’t already and let us know your thoughts. If you have any questions please feel free to ask in the comments section of this post and I will do my best to respond in a timely manner.