The other day Channel 2 in Atlanta had a news report about a vacant car dealership in Alpharetta and mentioned that the city was asking the Atlanta Regional Commission for help in finding a use for the property. You can read the report by clicking the picture below: 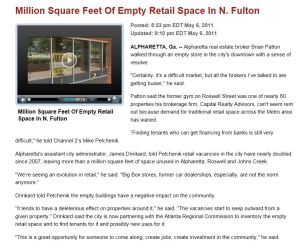 Then today I saw this article about kids that had found a use for vacant car dealerships in Alpharetta:

According to Alpharetta police, the five, whose names have not been released, broke into a vacant building in the 1400 block of Alpharetta Highway that was formerly an automobile dealership and set up a skate park.

So a few of Alpharetta’s enterprising youths have already solved the city’s dilemma: The city needs an indoor skateboard facility on the site! The market has spoken.