Yesterday I wrote about the distribution of Atlanta’s high wage workers and low wage workers as reported by the Atlanta Regional Commission. Not surprisingly the maps showed that the overwhelming majority of high wage earners in the metropolitan area live in the wedge formed between I75 and I85 on the North side of Atlanta.

That was interesting but not surprising. What I found more interesting and definitely more surprising was that is a big difference in the types of high wage earners that reside inside the perimeter (ITP) and those that live outside the perimeter (OTP). And counterintuitively I found that the higher earning professionals were actually more concentrated OTP.

As you can see on the map below the vast majority of people described as professional, scientific and technical workers live ITP in Buckhead or Dunwoody. According to the report this would include lawyers, accountants, architects and presumably doctors since the area includes Pill Hill where many of Atlanta’s hospitals are concentrated. Just like the location of high earners in general I found that interesting but not surprising.

What I found surprising was that the overwhelming majority of so-called “information” workers actually live outside the perimeter in North Fulton and South Forsyth county. The information workers are described as internet, telecommunications and data processing professoinals and according to the chart they average almost 20% higher monthly salaries ($6900 mo./ $5800 mo.) than the more traditional professionals who choose to live inside the perimeter.

It’s widely known that Alpharetta has many computer, telecommunications and data companies located here but I was really surprised to see that so few of these professionals choose to live downtown. Maybe they got tired of paying the tolls? 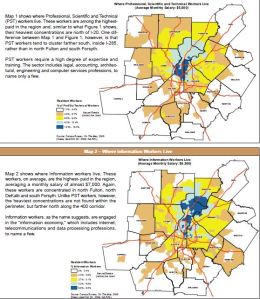